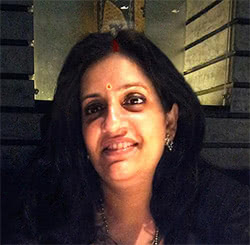 “Jyotish vidya draws to herself those people she wants to possess her.”

Just as those who can communicate telepathically need not know a language, those who are perfectly clairvoyant and clairaudient need not study Jyotish, for they are already possessed by the Jyotish Vidya. The rest of us, though, require preparation in order to become fit receptacles for her.

Acharya Vandana is a firm believer in the laws of karma in simple words “as you sow, so shall you reap. Good karma creates more good luck accumulations for better destiny. Similarly, so does bad karma also gives bad luck.She belives in view point of `Jyotish Vidya' , is that life is an intricate interplay of both fate and free will, where fate or karma is the reaction to our previous exercise of freewill.

Jyotish vidya does not exist in a vacum, it is a super science which has to be understood with the changing needs of the society and interpreted in present context. It helps us in understanding our general aim and trajectory of ones destiny.

Acharya Vandana is a world renound astrologer, with around 12 years of experience in helping and guiding people around the globe. She has been awarded the status of `Acharya’ from the world renound astrological institute’ Bhartiya vidya bhavan’, New Delhi. She has done extensive research on marriage and children, careers, medical astrology, corporate astrology and litigation astrology.

She also believes marriage is one of the most significant part of one's life and therefore the prediction should be given with precision and perfection. She has done extensive research on marriage compatibility and applies different compatibility techniques along with the classical methods

Parasara Muni, In his book, ‘Brhat Parasara Hora Sastra’, has explained the perfect method for alleviating aflictions indicated by planets, and that is by the sincere worship of God. Therefore she recommends classical astrological remedies and ‘upays’ include fasting, chanting of mantras, worship of the cow, giving in charity, performing various sacrifices, etc.

She is known for her precise predictions and has consulters in Middle East, Europe, and the USA

“The most beautiful experience we can have is the mysterious. It is the fundamental emotion that stands at the cradle of true art and true science. Whoever does not know it and can no longer wonder, no longer marvel, is as good as dead, and his eyes are dimmed. It was the experience of mystery -- even if mixed with fear -- that engendered religion. A knowledge of the existence of something we cannot penetrate, our perceptions of the profoundest reason and the most radiant beauty, which only in their most primitive forms are accessible to our minds: it is this knowledge and this emotion that constitute true religiosity. In this sense, and only this sense, I am a deeply religious man... I am satisfied with the mystery of life's eternity and with a knowledge, a sense, of the marvelous structure of existence -- as well as the humble attempt to understand even a tiny portion of the Reason that manifests itself in nature."